Cellulose is a renewable and sustainable material and is one of the most abundant natural polymers on earth. Traditionally, cellulose materials have been sold either as a material at the fiber level or as modified celluloses at the molecular level.

Let’s start by looking at MCC. Where does it fit in the world of cellulose? Microcrystalline cellulose is produced by an initial hydrolysis step removing the amorphous parts giving short rod-like fibrils with high crystallinity. The processing steps after the hydrolysis stage vary, resulting in different types of MCCs with a significant variation in properties. Two main types of commercial MCC products are powdered MCC and colloidal MCC. When producing powdered MCC qualities drying is performed without drying aids, resulting in porous particles of aggregated crystalline rods. These products are not dispersible in aqueous suspensions but can absorb high amounts of water or oil on its surface. Powdered MCC is used, among others, as tableting aids in pharmaceutical applications.

When producing colloidal MCC acid hydrolysis is often followed by mechanical shearing to release the cellulose crystallites, and drying is performed with co-agents that prevent the re-aggregation of the fibrils during drying. The colloidal MCCs are re-dispersible and will form weak gels in aqueous suspensions. Colloidal MCCs are widely used as rheology modifiers in applications ranging from food to industrial applications.

SIMILARITIES AND DIFFERENCES BETWEEN MCC AND MFC

Whereas MCC is produced by initial removal of the amorphous parts giving short rod-like fibrils with high crystallinity, MFC is generally produced in a way that makes it possible to retain both the crystalline and amorphous regions and conserving the molecular mass of cellulose. This gives a product characterized by relatively long and thin interconnected fibrils with a heterogeneous distribution of internal dimensions.

Microfibrillated cellulose and microcrystalline cellulose share many inherent properties of cellulosic materials like biocompatibility and biodegradability. When it comes to physical properties, MFC is most comparable to the colloidal MCC, whereas powdered MCC qualities have much higher internal and external particle dimensions and will not be dispersible in water.

MFC and colloidal MCC are both insoluble in water and have a high surface area compared to traditional cellulose fibers. In aqueous suspensions, they will create particulate fibril networks with multifunctional properties. However, due to the structural differences like fibril length and flexibility, the properties of these networks differ extensively. 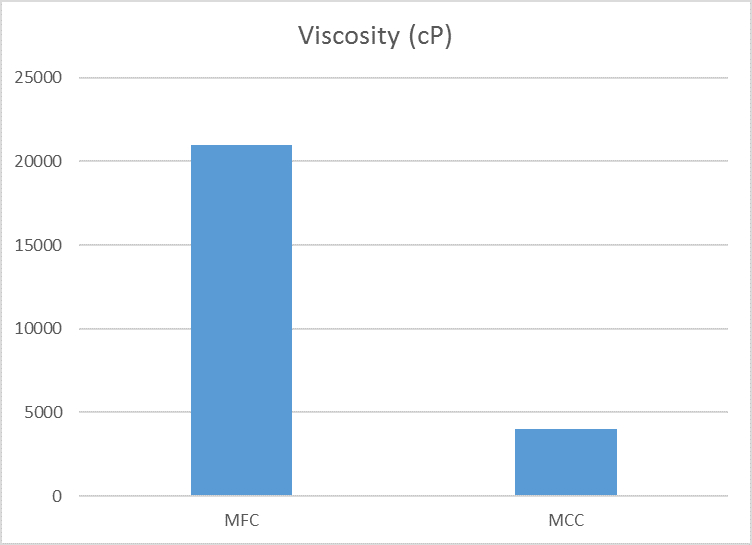 Viscosity of 2% suspensions of MFC and MCC.  MFC consists of long and thin fibrils connected in three-dimensional networks and will give a higher viscosity in aqueous suspensions compared to colloidal microcrystalline cellulose which consists of shorter rod like thin fibrils. The viscosity was measured with Brookfield viscometer using V-73 spindle at 10 rpm for 5 min.

MFC consist of long interconnected fibrils, and the resulting flexible MFC particles create a stronger network with higher efficiency compared to MCC. This is illustrated by the fact that MFC has high viscosity and yield stress, it is shear thinning and has high water holding capacity. You can read more about the rheological properties of MFC in the blog post Important rheological properties of microfibrillated cellulose. MCC, on the other hand, consist of short and stiff rod-like particles creating a much weaker network with lower viscosity and yield strength than MFC, and it is not as good at holding water.

MFC and MCC products have highly attractive properties giving a broad range of potential use. If you have found this blog post interesting, also take a look at the continuation blog post coming next week, covering differences between MFC and nanocrystalline cellulose.