Surfactants are present in most consumer products. The most familiar examples are shampoos, hand wash products and cleaning products in general. Switching to sulfate free surfactants improves the environmental profile, but can be a challenge. Let me show you a way to this.

The trend today is to move towards sulfate free surfactants. One of the advantages of doing so is obtaining a better green and environmental profile of formulated products. It is therefore a requirement that the ingredient used to improve the formulation of sulfate free product be safe for use and have an environmentally friendly profile. The disadvantage however is the challenge in finding innovative ways of thickening and stabilizing such systems.

Cellulose fibrils have shown to be very efficient in thickening and stabilizing sulfate free surfactants as shown in Figure 1. They improve rheology and stability due to the three dimensional physical network that is formed in the formulation when the product is dispersed according to recommendations.

It is however very important to understand how best to use cellulose fibrils in a surfactant based systems, especially those with foam forming ability. 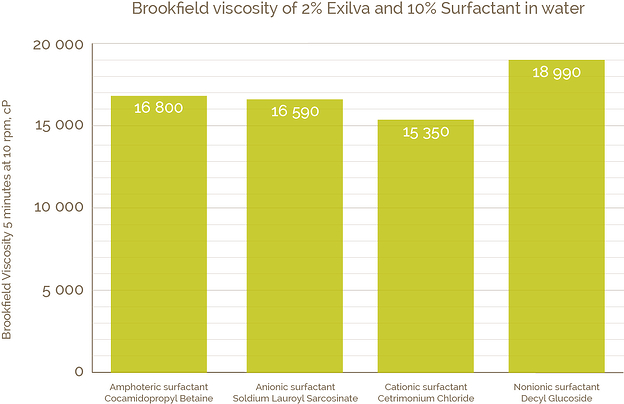 --> Read more about the compatibility of cellulose fibrils and surfactants.

How can one obtain stable formulations when using Cellulose fibrils and foaming surfactants?

The result of such an effect during the incorporation stage can be the unwanted phase separation while during the use of the product, the outcome can be longer and better foam stability, a positive effect.

Figure 2 shows the outcome of mixing cellulose fibrils with foaming surfactants at high shear and allowing the incorporation of air. Due to incorporation of air bubbles and foam, a foaming upper phase and a transparent lower phase are formed after some time leading to phase separation. It is therefore important to avoid foam formation during the formulation step. One should mix the dispersed cellulose fibrils and foam forming surfactants with optimized mixing speed and avoid air incorporation.

Cellulose fibrils are dispersed in the water phase using high shear if necessary. The mixing speed was then reduced and the surfactant was added to the cellulose fibrils.

Figure 3: A picture of a formulation containing a surfactant and cellulose fibrils.

Good dispersion is a critical factor for success

As written in an earlier blog post, a general advice when you do not obtain the expected effect in your formulations, is to examine the dispersion method and order of which the ingredients are added. If you suspect there is a problem with the dispersion, it might be a good idea to test different dispersion times and methods and see if this makes a difference.

The take-home message is that when using cellulose fibrils in your formulations, it is very important to notice that good dispersion is a critical factor for success.